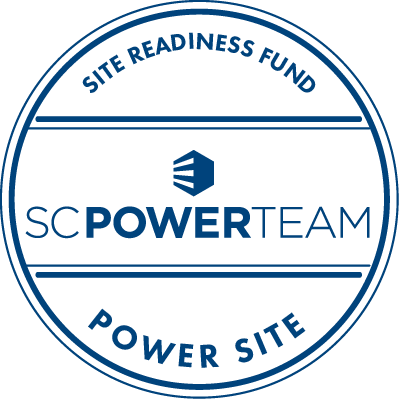 This award was presented to SC Power Team for its Site Readiness Fund (SRF) initiative, a $30 million fund established by its Board of Trustees in 2014 as matching grants to pair with funding from the state’s 20 electric cooperatives, local governments, and other resources to facilitate the enhancement of existing sites, parks, and buildings within the electric cooperative service territories. SRF’s objective: to create winning sites that can be competitive through a site selection process; support the advancement of a site; and better position the site for winning during the site selection process. SRF investments have funded items, to include but not limited to: land acquisition; water and wastewater upgrades; industrial park infrastructure upgrades; speculative building construction and upgrades; roadway projects; and general site improvements.

“Since 2014, more than $130 million in combined funds have been put into making sites market-ready throughout South Carolina,” explained Bob Paulling, Chairman of the Board of Trustees for SC Power Team. “The most recent example of SRF’s community impact is the opening of MM Technics first North American metal stamping plant in Newberry County; a $12.6 million investment which will create 65 new jobs. SRF funding was used for road upgrades, clearing, grubbing and grading of MM Technics’ location in Mid-Carolina Commerce Park.”

The SRF commitments exceeding $25 million has leveraged an additional $105 million in investment from local governments and electric cooperatives. The sites where SRF has been utilized are referred to by SC Power Team as “SC Power Sites.” The locations of these SC Power Sites are clustered in areas of significant growth in South Carolina, to include: Upstate, I-85 Corridor; Central Midlands, I-26/I-77 Corridor; Charleston Region, I-26/I-526 Corridor; and Pee Dee Region, I-95 Corridor. These areas share five characteristics: location; infrastructure; labor force; speed to market; and willing partners. Locations can be found on the SC Power Team website, SC Power Sites/Featured Sites web page.

Clancy Courtney, Product Development Manager and 30-year member of the SC Power Team, concentrates his efforts on marketing SC Power Sites and making sites market-ready. He accepted the award on behalf of the organization at the awards ceremony which was held during the NREDA Annual Conference in San Antonio, TX.

“The Site Readiness Fund is a community preparedness initiative established only four years ago, yet is having a profound effect on developing product, bringing sites to a market-ready status, and securing location announcements,” stated James Chavez, President and CEO for SC Power Team. “Through this initiative, the SC Power Team is carrying on its legacy of being essential to economic development in South Carolina and being partners in progress and prosperity.”

SC Power Team is dedicated to supporting its local and regional partners in promoting, attracting, and retaining businesses and new industry. The organization has done this for nearly three decades through competitiveness and community preparedness initiatives.

About South Carolina Power Team
South Carolina Power Team is a full-service, non-profit economic development organization representing Central Electric Power Cooperative, Inc., and the state’s 20 consumer-owned electric cooperatives. The power system serves the entire state (46 counties) and over half of its population. Its mission is to facilitate the growth of jobs, investment and electric load through the attraction of new industrial and commercial activity, as well as, the expansion and retention of existing businesses and industrial facilities. For more information, visit www.SCPowerTeam.com.