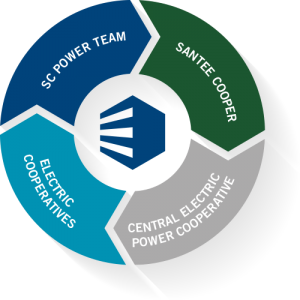 The Top Utility salute is given by Site Selection magazine to top utility economic development teams. The criteria includes analysis of corporate end-user project activity for the previous year in those utilities’ territories, and data from Site Selection’s Plant Database, and from utility and community reports. Other criteria include the utility’s job-creating infrastructure and facility investment trends; innovative programs and incentives for business, to include energy efficiency and renewable energy programs; and website tools and data. The acknowledgement recognizes accomplishments for the 2014 calendar year.

“The 2015 designation as a Top Utility is a great achievement for the SC Power Team and our partners. It demonstrates the new rates and incentives adopted by both Santee Cooper and the 20 electric cooperatives in 2014 are making us even more competitive,” said Larry Hinz, chairman of the Board of Trustees, South Carolina Power Team. In 2014 the SC Power Team board of trustees adopted an aggressive 5-year strategy. In addition to new rate incentives, it bolstered momentum through their commitment to invest more than $30 million through the Site Readiness Fund initiative, which matches local funds to advance sites and buildings across S.C. to make them truly market-ready.”

“We are thrilled to be named a 2015 Top Utility by an industry peer like Site Selection,” said James Chavez, president and CEO of the South Carolina Power Team. “In years past, we have been given an Honorable Mention for our economic development efforts. It is gratifying to know that our community-focused efforts have contributed to projects announcing in our service territory, and we are seeing success in nearly every part of the state,” Chavez continued.

“Economic development has always been a priority for Santee Cooper, and since 1988 we have seen much success by joining forces with the state’s electric cooperatives and the Power Team. I am proud of our accomplishments, all for the betterment of South Carolina. This is truly a powerful partnership,” added Lonnie Carter, Santee Cooper, President and CEO.

“This year’s Top Utilities are the class of their field when it comes to economic development teamwork,” said Adam Bruns, managing editor of Site Selection. “Like the best athletic teams, they know how to look for the open opportunity, turn on a dime when circumstances require it, communicate with teammates and move without the ball so they’re ready when the time comes to close the deal.”

“Utilities play a key role as participants in the economic development efforts of cities, regions and all areas working to improve their local business climate,” said Mark Arend, editor in chief of Site Selection. “This year’s Top Utilities were particularly successful in this endeavor in 2014.”